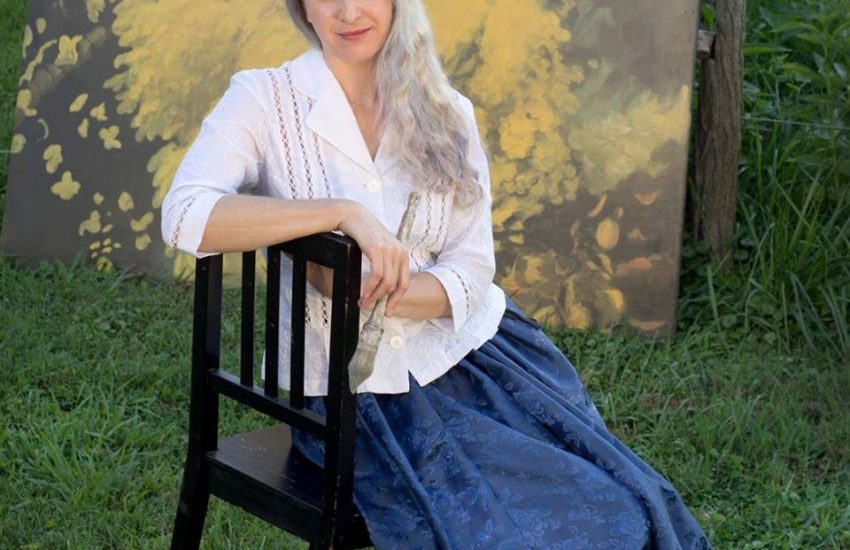 This week is Part Two of our Generation X-pert conversation with Sabra Crockett, owner of Sabra Lynne Decorative Painting, LLC in Louisville, KY. (You can check out Part One here). Let’s jump right back in.

GenX Manager: You spoke about giving feedback to Millennials and how you have to be mindful of how it might be received. Does it take it up a notch when you are critiquing someone’s art, something that can be so personal?

Sabra Crockett: Excellent point. I know that there are artists from all generations that really take their art so much more personally than I do. And I think it’s because of my background as a scenic artist. My art was never “my art”. It was the designer’s art. It was the director’s art. It was the audience’s art.

So I never had that preciousness with my art, and I have been able to detach myself, to an extent, from my art—and that’s important. I do recall how much more personally Millennials took feedback, and I thought maybe it was just because they were younger. But it also might be because of the encouragement that they had from their parents. “You’re wonderful! What you do is great!”

I never really had that. My parents tried to get me to move away from art, and I put my foot down. I said, “Look I’m going to be an artist. There’s nothing you can do about it. I’m going to school and I’ll figure out a way to make money.” Because they were right to be concerned about that, of course. I know as a parent I’m concerned about that as well too, to a degree.

GXM: There’s that GenX independence. Let me ask you–because I am hearing a lot of GenX influence in your story—what comes to mind for you when you think of Generation X? Did you have an affinity towards that label growing up? Do you have it now?

SC: I do. We were labeled as slackers, negative, cynical…a little anti-establishment. But really we were pragmatic. I do have an affinity for Generation X because the people that I grew up with were so damn smart. They were so politically engaged and aware, and they cared. But it wasn’t “hippy dippy” (really we were so anti-hippy dippy). We were all about love and peace too, just with an edge.

We were very passionate about causes. I remember being in PETA at Arcadia College and getting the college to stop experimenting on mice. I remember writing letters to corporations encouraging them to end those inhumane practices. We really wanted to make a difference. We took a responsibility for our actions and our future because nobody else was going to take care of us. We got that message a lot. I felt that we really had to pull ourselves up by our bootstraps and take responsibility for our futures.

GXM: What comes up for you as some of the defining moments of Generation X?

SC: I think of Kurt Cobain’s death as a defining moment. Going back, Nirvana and their influence was a defining moment. I remember it was my first year in college and we all gathered around a stereo to listen to Nirvana’s album, Nevermind and we were like, “This is amazing!” Then it instantly became mainstream, so Kurt Cobain’s death hit a generation of fans pretty hard. I think our connection with media in general; the rise of MTV for example, defines GenX.

It’s so different now—the Internet has given us so much information but it seems harder to find people that you truly connect with. I remember as a kid hanging out with friends, going to their homes. And my kids Skype or text friends. They’re hanging out too—just not in person. It’s wild.

GXM: Generation Z—the true digital natives. It’s very interesting to watch this generation come of age. They are remarkably informed, and more engaged than I remember us as teenagers. I don’t know if that’s good or bad.

SC: I think they have greater potential to be more informed, than us as teenagers, because of their access to digital media, and the internet. It’s really encouraging. I feel that my son’s generation is definitely more accepting of difference than our generation was. And it’s not nearly as cliquey as when we were growing up. We kind of defined ourselves by our label. I was labeled different by others at first, and didn’t find self-acceptance until I owned the label. I considered myself a ‘freak’ or a ‘punk’ by the type of music I listened to, and the culture I surrounded myself with. It’s what we called, “Alternative”, back in the day. Even if I don’t look like it now, I still consider myself that way. The alternatives took those labels, which were something negative, and built a kind of persona around that, because we weren’t accepted by mainstream society. Now my teenage son will say, “Yeah, I’m a nerd. I’m definitely a nerd.” I’ll say, “Cool. I’m glad that you’re owning that. It’s not a negative thing.” And it’s not! It’s much more accepted to be a nerd in my son’s generation. It’s also more accepted to be gay, bi, trans… My son had a friend come out in front of his classroom in the 7th grade! That was unheard of when we were kids! I’m just so absolutely encouraged by how our children are perceiving the world, and each other.

GXM: It is pretty awesome. Let me ask you this—you’ve been a working artist for nearly two decades. What advice would you give someone just starting out?

SC: I would say if you can find a “Business for Arts” class—take it! In college, they don’t teach you about how to price your work, how to generate a client list to keep in contact with, how to balance your budget or how you do your taxes. These are all things that you need to know, because the thing is, as an artist, you are a business owner. You have to treat your art “career” as a small business. And if you can find a program that can help you market and sell your art, that’s really helpful. Most importantly, if you can find a cause that is bigger than you or your art, and your art feeds into that cause, that is where you will thrive.

It’s important to be organized and to have good planning skills. This is what non-artists may not understand. I don’t go up to a wall and just start painting. There is so much planning and effort involved. I need to have a budget and a timeline. I need to create estimates so I need to understand my fair market value. And that means I have to understand what other artists are creating and selling. I don’t think people understand that you can’t be a flake if you’re going to be a successful artist. I am so appreciative of what I do, but it’s not the fun that people think it is.

Being professional is also really important. It’s important to be on time (that’s advice for Millennials specifically). If you’re given an opportunity, show that you appreciate it by being on time and being professional. Also, communication is key. For me, I like to know that my interns are engaged in the process. So ask questions, be engaged. And listen. Listen to your clients. Listen to their concerns and desires. Be empathic.

GXM: That’s really good advice. I think you’re correct about the perception that non-artists might have about the rules of engagement. They’re really not that different. It’s work, right? Thank you so much for being our first Generation X-pert.

Are you a Generation X-pert? We’re looking to interview GenX-ers about their career paths, their experience leading employees, and how their specific industry interacts with Boomers, GenX, Millennials and more as part of a series for TheGenXManager.com. Email HeidiMarcin@gmail.com for more information.