In honor of Season Two of Stranger Things, premiering on Netflix today. Post contains spoilers from Season One. 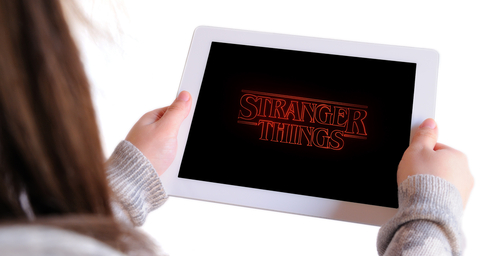 In case you haven’t noticed, 80s movies are having a moment. It seems the only stories coming out of Hollywood lately, aside from superhero movies (not complaining), are reboots, remakes, sequels and prequels.

I started watching Stranger Things about this time last year, a few months after it premiered on Netflix. By the end of the second episode, my face hurt from smiling. This was no ordinary television show. Equal parts Stephen (King) and Steven (Spielberg), it was a love letter to Generation X.

From the publicity surrounding the show, I knew it took place in the 80s, but I wasn’t expecting it to feel like an 80s movie. From its totally retro title sequence to the excruciating details of the fashion, décor and music of the time, it was clear. This show was for us.

True, every generation has an attachment to its own pop culture. We’ll all insist that the movies, music, television, etc. of our time was the best. But pop culture has a very special place in Generation X’s heart. The advent of cable television and MTV gave us an unprecedented level of exposure to television, movies and music that, though it seems downright quaint today, left an indelible mark on Generation X.

So what a lovely surprise it was for Millennial Stranger Things creators Matt and Ross Duffer to blow a giant kiss to some of GenX’s favorite movies. Just a few of the not-so-subtle inspirations are listed here, since you can make a case that there are at least 20 more.

Theme: Kids on bikes hiding and protecting an otherworldly being from big bad government dudes.  Movie: E.T. The Extra-Terrestrial

I was nine years old when I saw E.T., and I remember it being one of the first movies I saw with my parents where they liked it every bit as much as I did. When the Stranger Things kids hid Eleven in the house, disguised her in a blond wig, placated her with sweets and went on to outsmart the bad guys, it was apparent that the Duffer brothers were fans of E.T. as well.

Theme: Exuberant youths on a quest.  Movie: The Goonies, Stand by Me

The tween years are a tough time. Adults will dismiss out-of-hand the idea of following a treasure map or that your friend has been kidnapped by an evil creature and is trapped in an alternate dimension. Thankfully, it’s also the time of life where you can convince your other tween friends to follow you on an adventure that will either save the day or bond you for life. Personally, the Goonies vibe for me was a little stronger than Stand By Me, though I see the connection. Maybe it was because Barb’s glasses looked just like Martha Plimpton’s. Poor Barb.

Theme: Pretty but smart/quirky/unpopular girl catches jerky popular boy’s eye while sensitive male friend who is much better suited to her suffers in silence.  Movie: Pretty In Pink, but pretty much any 80s John Hughes movie besides the Home Alones.

Perhaps I’m still smarting 30 years later from the fact that Andie ended up with Blaine and not Duckie, so I was rooting hard for Nancy to end up with the shy, sensitive boy with the great taste in music. Oh well. There’s always Season Two. Even as an adult, I did appreciate the cautionary tale in this storyline about what can happen when you abandon your friends for a boy. Poor Barb.

Theme: A portal to hell is totally in your house, and your kid is going to find it.  Movie: Poltergeist

I still can’t forget Carol Ann’s voice emanating from the television “Mmmmommmy…”. So creepy. But just like Diane in Poltergeist, Joyce is able to figure out by Episode Three that her child is trapped in some kind of evil dimension and she is damn well going to bring him back. Never underestimate the power of a mother’s love. We will pull you from the gates of hell.

Theme: Obsession that reads as crazy and drives away almost everyone you care about.  Movie: Close Encounters of the Third Kind

After Roy Neary’s encounter with a UFO, he becomes so obsessed with proving the existence of aliens that he loses his wife and kids over it. Joyce’s singular focus on proving her son is alive but in an alternate universe alienates nearly everyone around her. In both cases, however, they find someone who believes them and is in a position to help: Jillian in Close Encounters and Jim in Stranger Things.

I loved that we had some 80s teen movie icons pop up for this show. Seeing Matthew Modine on screen was a reminder Vision Quest was a long time ago. And how fitting is it that GenX queen Winona Ryder is the star of the show? Whether she was playing awkward young girl Rina in Lucas, angsty tween Lydia Deetz in Beetlejuice, cool girl Veronica in Heathers or struggling twenty-something Lelaina in Generation X’s touchstone movie Reality Bites, she was always our Manic Pixie Dream Girl (before that was a thing).

I enjoyed Season One, but if the show were stripped of its awesome GenX-iness, I would find the plot itself kind of rudimentary. I also wonder, now that the Duffer brothers have the whole 80s thing pretty well covered, if the second season will hold less charm but more substance.